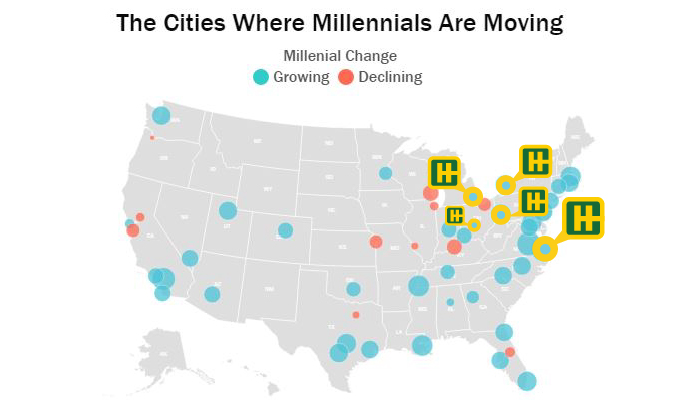 Time.com discusses the 25 cities where millennials are moving, with five locations apart of Howard Hanna’s service area. Virginia Beach holds the highest ranking, with a 16.4% change in millennial population.

Millennials are moving to America’s cities — and not just the biggest ones. While places like New York City and Los Angeles remain millennial magnets, research from the Urban Land Institute shows that smaller cities, from Virginia Beach, Va., to Riverside, Calif., are actually seeing the most relative growth in their population of 25-to-34-year-olds.

Virginia Beach’s uptick in millennials — a 16% increase from 2010 to 2015 in the metro area — is no surprise to Bryan Stevens, president of the Hampton Roads Chamber of Commerce, which includes Virginia Beach, Norfolk and Newport News. Several years ago, Stevens’ department asked local millennials what would make the region a more attractive place to live, work and raise a family. In response to the survey’s results, the city has focused on extending a light rail, which launched in 2011, as well as developing new restaurants and revamping city centers. “All of that has been deliberately evolved over the past few years,” Stevens says. Virginia Beach has also earned a reputation for being an attractive home for retirees too.

Over the past decade, there’s been an increase in the number of young adults in urban areas, largely due to a 32% increase in births between 1978 and 1990, according to Dowell Myers, professor of demography at the University of Southern California. He says that upswing has led people to believe that there’s been a real change in millennials‘ preferences, when really there were just a lot more young people born 25 years ago. Nationally, 21% of 25-to 34-year-olds lived in cities in 2015, and 73% lived in suburbs — a ratio that is unchanged from 2010.

Disclaimer: This article originally appeared on Time.com on June 2, 2017, and was written by David Johnson. Howard Hanna Real Estate Services makes no claims of ownership of this article or its contents.