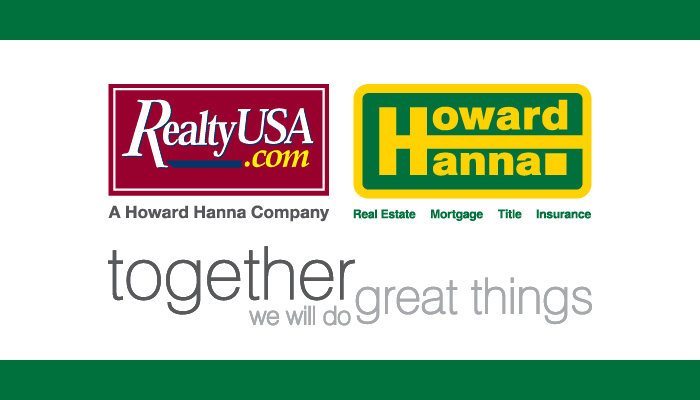 “I have known and respected the Hanna family for years. Their growth in the last decade has been amazing.  A common theme of commitment to our agents by developing the best in products and services for customers and clients will assure our combined success,” said Mr. Whitehead.

RealtyUSA is the #1 broker in the state of New York with 65 office locations covering Western and Central New York, Northern New York, the Capital Region and the Southern Tier.  The company has more than 2,200 sales associates and employees and is ranked the 9th largest real estate company in the country with 23,023 closed transactions last year.*

Howard Hanna Real Estate Services is the #1 broker is Pennsylvania and Ohio with 205 office locations in the eight states of Pennsylvania, Ohio, New York, Virginia, Michigan, West Virginia, North Carolina and Maryland.  The company has more than 7,100 agents and employees and is ranked the 4th largest real estate company in the country with 66,714 closed transactions last year.**

The merger ranks Howard Hanna as the 3rd largest real estate company in the United States.  The combined performance of the joint company is $16.2 billion in closed sales volume last year and 89,737 closed transactions.  The combined strength of the companies is more than 9,000 sales associates and employees in 270 offices.  Mr. Whitehead will become Chairman of the combined company in New York State.

“We always look to move forward,” said Helen Hanna Casey, President and CEO of the family-owned and operated Howard Hanna Real Estate Services.  “We made the decision in the mid-1980s to remain independent, with the goal of always being a large regional broker in the Mid-Atlantic, Midwest and Great Lakes regions. And when you find a prominent company that is run with the utmost integrity and is so like-minded with complementary management styles and great managers, it makes sense to come together. “We’ve been in New York since 2003 in Chautauqua County, and last May Nothnagle Realtors merged with us, adding 32 offices in Western New York, the Southern Tier and Finger Lakes areas.   Armand D’Alfonso will be President of the entire New York organization.”

Expansion in Buffalo and entry into the next major metropolitan areas of Syracuse and Albany is a logical move into new territory.  “RealtyUSA and Howard Hanna agents will benefit from each other’s markets for referrals in areas they do not serve.  When we expand our reach, everybody within the Howard Hanna family of companies benefits,” said Ms. Casey.

“RealtyUSA is truly one of America’s great real estate companies, led by Merle Whitehead, who is recognized as a national leader in real estate,” said Howard W. “Hoby” Hanna, IV, President of Howard Hanna Real Estate Brokerage.  “Our business philosophy is very similar, and operationally they know what it takes to create the American dream of home ownership for New Yorkers.”

The transition will be seamless for both agents and clients, and the range of services offered will be expanded for both.

“We will first introduce our exclusive 100% Money Back Guarantee, which gives buyers added confidence to purchase a home.  Additionally, we will be expanding our insurance company, adding approximately 15-20 new positions, as well as increasing marketing and technology systems with another 20 positions throughout the company,” added Hanna.

Founded in Buffalo, New York in 1959, the company now known as RealtyUSA emerged as a dominant local, statewide and national real estate leader as did Howard Hanna, founded in Pittsburgh, Pennsylvania in 1957.  The two companies have known and worked with each other for decades through relationships in the real estate business and began discussions about six months ago about a possible merger.

There will not be a change to the company name or to local leadership. Both the RealtyUSA and Nothnagle logos will feature the tagline “A Howard Hanna Company.”

*Rankings based on the REAL Trends 500 report, May 2016, which ranks the 500 largest real estate brokers in the United States by 2015 closed transactions.