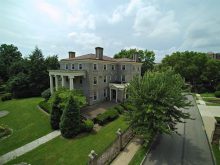 Beatty Mansion, A Homes of Distinction Listing, Featured on TribLIVE

A Howard Hanna Homes of Distinction listing, the Beatty mansion, was recently featured on TribLIVE. The mansion, which is listed by Howard Hanna agent Roslyn Neiman for $2.45 million, is located in the Shadyside neighborhood of Pittsburgh. The home is… Read more ›

AuthorJasmine Davis
Published on23 Jan 2020
Categories
In The News

Pittsburgh, PA (January 21, 2020) – Following another year of steady growth and unprecedented success, HannaFinancial, the financial services arm of Howard Hanna, has announced the promotion of three new executives who will help ensure that the Hanna family of… Read more ›

Did you know that someone can “steal” your house or use it to borrow money and leave you obligated to pay off the loan? The good news is that not all hope is lost: you can protect yourself from deed… Read more ›

Do You Have to Paint Before Selling a House?

Whether you love to live in color or your neutral hues could make the most stylish Scandinavian designer swoon, if you’re thinking about selling your home, there’s one item that should be at the top of your list (after washing… Read more ›

Can I Still Buy That House? Contingent, Pending, & Under Contract in Real Estate

At long last, after much thought and careful research, you’ve finally found the home of your dreams… but when you look at the listing on the web, it’s marked as being “contingent,” “pending,” or “under contract.” What does that mean?… Read more ›

From the President’s Desk: Twenty-Twenties Costume Contest Winner The Magic of Giving Back Francis’ Corner: You Dirty Dog 15th Year With Safeco Insurance Results from “Whats Your Favorite Snow Day Activity?” What are you spending your tax refund on?” What… Read more ›

Pittsburgh, PA (January 14, 2020) – The Pittsburgh Business Times released its inaugural Power 100 list this week, which identifies leaders who have had the most influence on the Southwestern Pennsylvania business scene over the past year. Helen Hanna Casey,… Read more ›