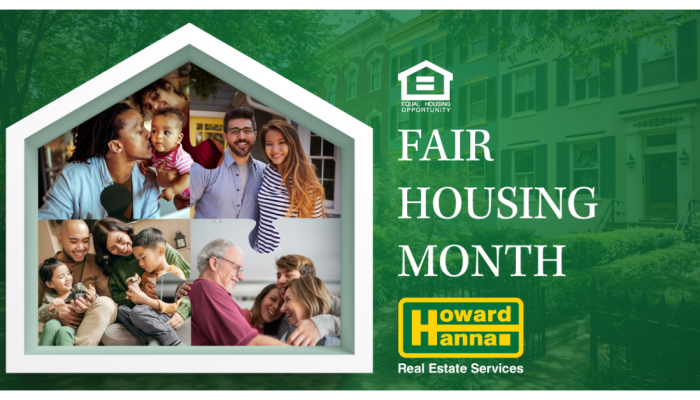 When the Fair Housing Act of 1968 was passed into law, it was intended as a follow-up to the Civil Rights Act of 1964 and prohibited discrimination in housing based on race, religion, national origin, or sex. When passed, it was meant to eliminate overt discrimination and disparities in the housing market.

But in 2019, we saw the results of a three-year Newsday investigation. The report uncovered unequal treatment by real estate agents on Long Island, despite the legal protections that aimed to end such treatment.

In response to that report, Howard Hanna moved to make changes in our daily practices, in an effort to better emphasize and carry out our mission. Every day, we want our agents and staff to make a difference in people’s lives, and we want that difference to align with our values: Integrity, Pride, Enthusiasm, Diversity, Stability, Caring, and Growth.

However, we know that to continue to transform the real estate experience with visionary people, products, and services, we have to be aware of what is going on in our communities, cities, country, and even world. So this Fair Housing Month, Howard Hanna is reflecting on our nation’s and our industry’s history, and on the world in which we work today.

Homeownership Then and Now

According to an article by Forbes, Black Americans were able to increase their homeownership rate from 35% in 1950 to 42% in 1970, likely in part because of The Fair Housing Act being passed into law. However, the 2017 census found that 41% of Black households owned their own homes. To see this number practically unchanged from 1970, and to be even lower now, is a tragedy. Why is this happening?

History is complicated, of course, and there are likely a number of factors influencing this situation. The following are just a few examples of historical events that put these homeownership numbers into context.

The Origins of Redlining

However, the HOLC wouldn’t do mortgages in areas deemed economically hazardous. On maps of major cities, inner-city neighborhoods were often marked in red as the HOLC assessed credit-worthiness – a practice known as redlining. As a result, as confirmed by a study in the American Sociological Review in 2020, the HOLC led to substantial and persistent increases in racial residential segregation.

The influence of the HOLC stretched beyond the corporation itself. In 1934, the perceived success of the 1933 program inspired the government to create the Federal Housing Administration (FHA), which came out with a new mortgage program. The program would insure mortgages with a lower down payment of 20%, but with a longer repayment period of 20 years. However, when created, the FHA also used redlining practices and language in its operations.

From the 1950s to 1968, some changes in policy could be seen, though none were as an extensive as the language of the Fair Housing Act, which aimed to finally recognize redlining as a negative and pervasive practice.

While the Fair Housing Act aimed to correct the policies of the past, it could not change one of the toughest facts in real estate: It takes time to build new houses. And when inventory is low and demand is high, house prices go up.

Unfortunately, rising prices on a small inventory inevitably impacted potential homebuyers. The cost of housing and of home repairs also was, and remains, a common reason for people to avoid buying homes. In these situations, prospective homeowners opt to rent homes or apartments, and avoid being in a situation where their house may fall into disrepair.

According to data from the National Bureau of Economic Research, in the early 2000s, Black Americans were 105% more likely than Caucasian Americans to have a high-cost mortgage. As a result, a higher number of Black homeowners were impacted by the 2007-2010 housing crisis. And, according to cnbc.com, roughly 10 years after the housing crisis has ended, many Black families have still not recovered from this crisis, and as a result are not in the best position to become homeowners.

These reflections are not meant to be a comprehensive list of the factors affecting homeownership in 2021. They are instead a single step in discussing an important part of history, and a necessary subject for us to consider during Fair Housing Month.

At Howard Hanna, we want to work together to make a difference in people’s lives. We want to do this because it is clear to us that the practices implemented in real estate in the last 53 years have not worked, meaning they have not addressed every barricade created throughout the history of our industry. It is our goal to continue to reflect on what has not worked. And ultimately, through reflection and dialogue, we hope to create new efforts and policies that do make a difference.