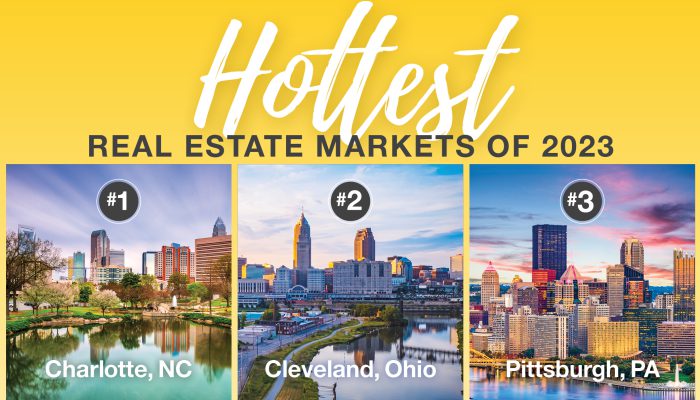 According to Zillow, Charlotte took the top spot thanks to its growth in home values and an increase in owner-occupied residences. Charlotte has been an important market for Howard Hanna since HHRES joined forces with Allen Tate Realtors in 2018.

Receiving the coveted second place spot, Cleveland ranks high on the list because of its increased market velocity and impressive job growth. Zillow ranked Pittsburgh in third place because of the city’s high ratio of jobs added per new house permitted.

“It’s exciting to see Howard Hanna markets at the top of this list,” said President Howard “Hoby” Hanna IV. “We’ve seen tremendous growth in Charlotte, Cleveland and Pittsburgh, and we’re eager to watch them continue growing this year and beyond.”

Howard Hanna operates major corporate offices in both Cleveland and Pittsburgh, and Allen Tate Realtors, a Howard Hanna company, is headquartered in Charlotte. While the housing market is expected to cool down in many cities across the U.S. in 2023, these cities represent the most competitive markets for buyers.

Zillow evaluated its rankings based on a variety of real estate markers, including each city’s growth in home values, demographic data and projected home inventory and market velocity for 2023. They evaluated the top 50 metropolitan areas in the U.S. in the study. Rounding out the forecasted top 10 housing markets are Dallas, Nashville, Jacksonville, Kansas City, Miami, Atlanta and Philadelphia.

To learn more about the rankings or Zillow’s methodology, you can read the full article here.

About Howard Hanna: The Hanna Family of Companies proudly provide real estate, title, insurance and mortgage services to clients across 13 states. As the largest family-owned and -operated real estate brokerage in the United States, this full-service real estate company has nearly 400 offices and 14,000 sales associates and staff, including many of the industry’s top-producing real estate, title, mortgage and insurance agents. For more information, visit www.HowardHanna.com.