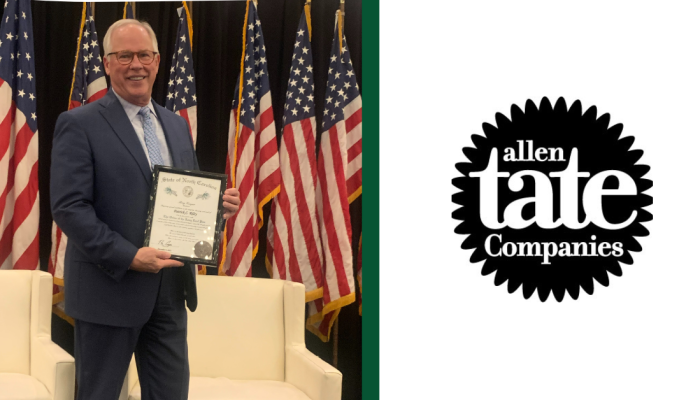 Charlotte, N.C., DECEMBER 16, 2022 – Allen Tate Companies President and CEO Pat Riley has been inducted into the Order of the Long Leaf Pine, one of the highest civilian honors bestowed by the Governor of the State of North Carolina.

The Order of the Long Leaf Pine, created in 1964, is reserved for individuals who have made significant contributions to the state and their communities through exemplary service and exceptional accomplishments.

Riley has led the Allen Tate Companies since 1992 and has helped grow it from three local offices to a full-service homeownership company with 70 offices across a seven-region footprint in North and South Carolina. In 2022, Riley led the company’s largest acquisition of Beverly-Hanks Real Estate, with 18 offices in the Asheville/Mountain region. The company is on track to report more than 20,000 closed sales transactions totaling $8.5 billion for 2022. Along with its partner Howard Hanna Real Estate, the company is the No. 1 independent real estate company in the country.

Riley’s service to the community spans his 31-year tenure with Allen Tate. He has chaired every major civic board in Charlotte, including the Charlotte Chamber, Arts & Science Council and Charlotte Center City Partners. An Eagle Scout, Riley has served as president of the Boy Scouts of America, Mecklenburg County Council, chaired the annual Leadership Dinner and received numerous service awards.

“I am so pleased that the Governor of our great State of North Carolina recognized Pat’s Riley’s servant leadership with the Order of the Long leaf Pine. This is such a wonderful recognition of a deserving leader. Pat is a giant among giants when you look at his service to our state and community, and I am especially proud of the work we did together while he served as the Board President of the Mecklenburg County Council, Boy Scouts of America,” said Turner.

“Congratulations to Pat Riley, a friend and mentor for more than 20 years and a long-time board member at Charlotte Center City Partners. He is a model for how to care for, invest in and build for the future of our community through vision, business, arts, education, faith and scouting. Thank you, Governor Cooper, for recognizing one of our state’s finest with the Order of the Long Leaf Pine,” said Smith.

Currently, Riley serves on the Charlotte Executive Leadership Council and the board of directors for Best NC, a non-profit coalition committed to improving public education.

At Allen Tate, Riley champions Tate Cares, a combined giving initiative that supports public education; arts, culture and history; and United Way. More than $5.78 million has been raised for Tate Cares in the past 25 years.

Riley is a two-time recipient of the Old North State Award, recognizing dedication and service beyond expectation and excellence to the state, receiving the honor in 2008 and 2020.

“When Allen (Tate) invited me here to build the company, he told me I needed to get to know the needs of this community – that there were no medals for yesterday’s heroes. That began my journey of following my passion for public education, the arts and economic development to continuously better my new home in the Carolinas,” Riley said.

The late H. Allen Tate Jr. was also inducted into the Order of the Long Leaf Pine in November 2008.

About Howard Hanna: The Hanna Family of Companies proudly provide real estate, title, insurance and mortgage services to clients across 13 states. As the largest family-owned and -operated real estate brokerage in the United States, this full-service real estate company has nearly 400 offices and 14,000 sales associates and staff, including many of the industry’s top-producing real estate, title, mortgage and insurance agents. For more information, visit HowardHanna.com.