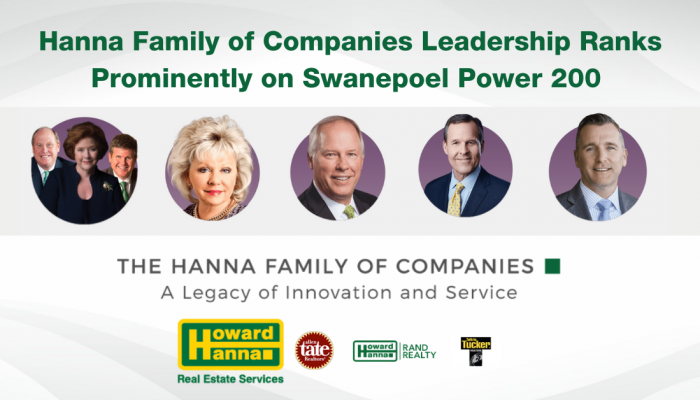 The recognition of multiple generations of leadership is a key insight into Howard Hanna’s business. It showcases the forward movement of the company – not only how the organization operates today, but ultimately the vision for the future.

In addition to being named in the Top 10, Casey is the highest ranked woman on the 2022 SP 200. As a senior executive and integral leader at the company, Casey has played a large role in the expansion and evolution of the Howard Hanna brand.

In addition to the Hannas, the SP 200 recognized four additional leaders across the Hanna Family of Companies – which in turn, reinforces the power of the organization’s leadership ability and  recognition that as a combined entity, the organization is stronger together.

“I am thrilled to see how many people across our organization were represented on the list,” said Casey. “We have the best and brightest leaders in the industry, and we are proud to have them be an integral part of the Hanna Family of Companies.”

Kristine Burdick, President Midwest at Howard Hanna Real Estate Services, was ranked #149 on the list of prestigious real estate leaders. Managed by Burdick, Howard Hanna’s Midwest region includes approximately 2,300 agents and 54 offices throughout Ohio and Michigan. She has more than 30 years of experience in the real estate industry and has been with Howard Hanna since 2004. Burdick is also #32 of the highest ranked women on the 2022 SP 200.

Coming in at #198, Matt Rand, Chief Executive Officer of Howard Hanna | Rand Realty, rounds out the Hanna Family of Companies representation on the SP 200. Rand joined Howard Hanna in September 2020 with the acquisition of Rand Realty, a firm established by the Rand family in 1984.

“We’re pleased to see leaders across the collective Hanna Family of Companies recognized on this list,” said Hoby Hanna. “It’s a true representation of the strength of our combined brands and how we view our success at a global level.”

This is the ninth edition of the SP 200, which is published by real estate consulting firm T3 Sixty and is the only formal annual analysis and ranking of the real estate industry’s 200 most powerful and influential leaders.

About Howard Hanna: Howard Hanna Real Estate Services is the #1 family-owned and -operated independent broker in the U.S.A. The full-service real estate company has more than 400 real estate, mortgage, insurance, title, and escrow service offices across 11 states, including Allen Tate Realtors® in the Carolinas and The F.C. Tucker Company in Indiana, with more than 13,000 sales associates and staff, including many of the industry’s top-producing real estate agents. For more information, visit www.HowardHanna.com.