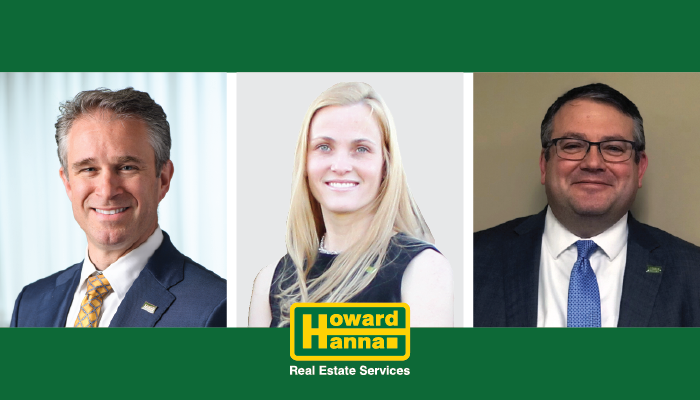 Pittsburgh, PA (January 21, 2020) – Following another year of steady growth and unprecedented success, HannaFinancial, the financial services arm of Howard Hanna, has announced the promotion of three new executives who will help ensure that the Hanna family of companies continues to thrive in 2020.

An alumnus of Central Catholic High School, Bauer holds a bachelor’s degree in Real Estate from Penn State University. He spent 14 years as a mortgage originator in Shadyside and Squirrel Hill, followed by 10 years as Manager of Originations for Howard Hanna Mortgage.

“Peter Bauer has been a tremendous leader within our organization for 24 years,” noted F. Duffy Hanna, Esquire, President of Howard Hanna Financial Services. “His skills, expertise, and creativity have contributed to the substantial growth of our financial services group.”

Jim Axner has been named as the Vice President of Mortgage Originations in Ohio and Michigan. Axner was previously Midwest Sales Manager for Howard Hanna Mortgage. In his new role, he will work out of the Ohio Home Office in Mayfield Heights, OH.

Axner will oversee mortgage loan originations and sales in Ohio and Michigan. A graduate of the University of Michigan – Ann Arbor, he will draw on his 27 years in the mortgage business, which includes experience as a Mortgage Loan Originator in Gates Mills, Solon, and Pepper Pike, as well as 11 years as a Sales Director.

“For 20 years, Jim Axner has been an exemplary leader of Howard Hanna Mortgage Services,” Hanna observed. “His passion and creativity have played a fundamental part in countless families achieving the dream of home ownership with Howard Hanna.”

Danielle Shearer has been named as Vice President of Operations for Howard Hanna Insurance Services. Shearer, who joined Howard Hanna in 2005, became General Manager in 2018, and will retain many of those responsibilities in her new role. Her new duties will include engaging in strategic planning on insurance-related matters and overseeing accounts and policies associated with Hanna Holdings.