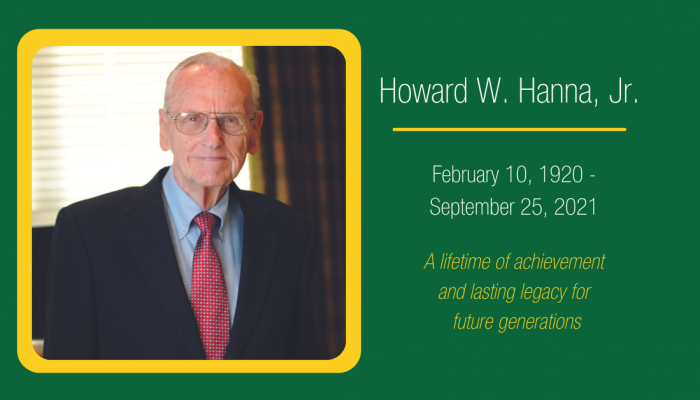 Pittsburgh, PA (September 27, 2021) – The Hanna family is deeply saddened to share the news of the passing of their patriarch, Howard W. Hanna, Jr., on Saturday, September 25, 2021. At 101 years old, Mr. Hanna led a life well-lived, impacted an entire industry, and remained a dedicated family man and community leader.

In 1957, Mr. Hanna founded Howard Hanna Real Estate Services on the corner of Bayard and Craig streets in the Shadyside neighborhood of Pittsburgh. This office, his first in what would become a flagship for hundreds more through the years, was so influential in the region that this neighborhood corner is now known as Howard Hanna Way. His influence in the community extended beyond that region and touched many lives across the industry, but always started with his supportive wife, the late Anne Freyvogel Hanna, his family, agents, and employees. Mr. Hanna’s flair for the personal touch is one of his most memorable qualities, with many folks remarking on his handwritten notes through the decades.

Prior to starting the real estate business, Mr. Hanna earned two business degrees from the University of Pittsburgh, served in the U.S. Army in World War II, achieving the rank of captain by the time he left military in 1946, held a variety of roles in local chambers of commerce across the region, and served as executive vice president for the Builders Association of Metropolitan Pittsburgh and executive vice president of the Home Builders Association of Greater Cleveland.

The real estate business that was so humbly started in a single office in 1957 has since blossomed into a national brand as the largest independently owned and operated real estate brokerage in the United States. Through Mr. Hanna’s determination since day one, and the leadership of his children and grandchildren during the past 40 years, the business is now a full-service real estate company with more than 400 residential and commercial real estate, mortgage, insurance, title, and escrow service offices across 11 states, and more than 13,000 sales associates and staff members.

As a dedicated real estate industry business leader, Mr. Hanna served as the former chairman of the Pennsylvania Real Estate Commission. A lifetime of achievement has been recognized in the multiple awards and honors that Mr. Hanna received throughout the years, not only for business efforts but also for supporting the communities in which he lived and worked. In 2001, he was recognized with a Lifetime Achievement Award from the Realtors Association of Metropolitan Pittsburgh.

In May 2018, Mr. Hanna was awarded the Senator John Heinz History Center’s 26th Annual History Makers Award for giving back to the community and helping to shape the Western Pennsylvania region. As a former Eagle Scout, in August 2021, Mr. Hanna was honored with the inaugural William S. Dietrich II Award, which is presented to a Scouting alumnus for distinguished public witness to the Scout Oath and Scout Law in his or her chosen profession or field of endeavor.

Now in the third generation of leadership, Mr. Hanna’s grandchildren are running the business that he was so dedicated to building through the years and will continue their dedication to Howard Hanna Real Estate Services far into the future.

Funeral arrangements are being handled by John A. Freyvogel Sons, 4900 Centre Ave., Pittsburgh, PA 15213. Visitation there is from 3 to 7 p.m. Tuesday, September 28, and Wednesday, September 29. The funeral is at 10 a.m. Thursday, September 30, at St. Paul Cathedral in Oakland. Memorial contributions may be made to the Howard W. Hanna Jr. Scholarship Fund at the University of Pittsburgh or the Urban League of Pittsburgh-Cleveland Hanna Home Ownership Fund.

About Howard Hanna: Howard Hanna Real Estate Services is the #1 family-owned and -operated independent broker in the U.S.A. The full-service real estate company has more than 400 real estate, mortgage, insurance, title, and escrow service offices across 11 states, including Allen Tate Realtors® in the Carolinas and The F.C. Tucker Company in Indiana, with more than 13,000 sales associates and staff, including many of the industry’s top-producing real estate agents. For more information, visit www.HowardHanna.com. Contact: Josie Schultz  l  josieschultz@howardhanna.com